The top 5 most expensive celebrity rings


Usually we’re happily out of the loop when it comes to celebrity gossip, but we have to admit that there is one part of Hollywood culture that never fails to excite us: engagement rings.

Yes, with billion dollar budgets and a penchant for one-of-a-kind design, the red carpet A-listers most certainly know to how rock some truly unique jewellery. Here’s a quick roundup of five of the most expensive celebrity engagement rings of 2016:

Everyone’s favourite Australian model (sorry, Elle!) Miranda Kerr was officially taken off the market in July last year when Snapchat CEO Evan Spiegel got down on one knee and presented her with the stunning engagement ring pictured above.

Featuring an enormous 1.75-2.5 carat diamond bordered on either side by tapered baguette diamonds, the ring is a headturner yet still manages to evoke a timeless and understated style. It’s estimated that the ring cost around $110,000 - expensive, sure, but more than affordable for billionaire Spiegel.

July 2016 also was the month in which the Duchess of Cambridge’s little sister, Pippa Middleton, got engaged to hedge fund millionaire James Matthews.

Set in white gold or platinum and featuring a 3 carat stone encircled by a halo of diamonds, the ring is an interesting mix of classic and contemporary. The distinct Art Deco vibe is balanced out by the inclusion of a bezel, which lends a sense of modern design to the overall aesthetic.

I'm so blessed and honored to have good man in my life, I love you @robkardashian ! #7carats #VVS @benballer

Love them or hate them, you can’t deny that the Kardashians sure know how to make a statement. In 2016, Rob Kardashian proposed to girlfriend Blac Chyna with an extravagant 7 carat, round-cut diamond ring that cost him around $454,000.

It’s not the most subtle piece of jewellery you’ll ever see, (then again, the Kardashians aren’t exactly known for their subtlety), which made it all the more difficult for Rob and Chyna to keep the engagement a secret when pictures of the ring began circulating online. Unsurprisingly, a healthy amount of drama ensued when the rest of the Kardashian clan found out... 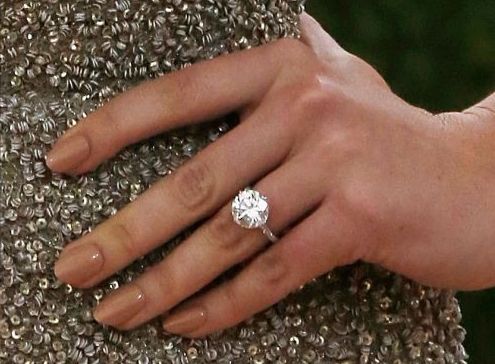 Detroit Tigers pitcher Justin Verlander finally put a ring on long-time girlfriend Kate Upton in 2016 - and what a ring it is! A gigantic 8 carat diamond centre stone in a six-prong setting makes up the centrepiece, which is augmented by a number of smaller diamonds set into the band.

“I’m really excited. He asked me right before the [baseball] season started so we’ve been keeping it on the down low for quite a while. … I’m excited to finally be able to share it with the world,” said Kate, as quoted by US Magazine.

Experts estimate the ring could be worth as much as $2 million.

Despite their romance unfortunately fizzling out (the pair split up a few months after Packer’s proposal), Mariah’s love for the ring apparently never waned - she decided to hold onto the ring after they the engagement was called off. Can you blame her?

While the celebs might have missed the memo, a beautiful engagement ring doesn’t have to cost an arm and a leg. Give us a call today to find out how we can help you create the custom engagement ring of your dreams.